The arrival of the newly born surely ranks among the top pleasures the human being can experience.

The birth of a child must be registered within a few days of birth at the local Registry of Births Marriages & Deaths. A baby naming, or ‘welcome to the human race’ ceremony can take place anytime thereafter.

Humanist naming ceremonies are unique celebrations and can take place anywhere, but usually at the home of the parents, or other family members.

They are non-religious, devoid of script, set patterns or formulae.

They can be arranged for any day of the week at any time, although it is usual for such a ceremony to occur over a weekend. (People work during the week, evenings are spent relaxing after a day’s work!)

Baby Naming ceremonies can be as short or as long as the parent’s desire. However, it is recommended that the service should be no longer than 15 or 20 minutes.

If the parent’s home cannot accommodate a large number of guests a more suitable venue must be obtained elsewhere.

One of the most important aspects of a Baby Naming ceremony is to impress upon all guests the absolute need to be at the venue in good time so that the ceremony can begin on time and without interruption.

If a humanist Celebrant has been engaged to conduct the ceremony it must be remembered that he/she may have a subsequent engagement to attend so the courtesy of promptness is essential.

Who conducts the ceremony?

Anyone may be engaged to conduct the ceremony – a close personal friend, a relative, one or both of the parents.

Providing such a Principal overseer of the ceremony is confident in stage managing the occasion and able to speak confidently before a number of people all should go well.

Many parents opt for an experienced Celebrant, and after a meeting with him/her, one in whom they feel confident will conduct the ceremony with informal but meaningful aplomb.

An experienced Celebrant will help formulate the procedure and will bring an added touch of dignity to it, and thereby helping to make it a ‘real occasion’.

‘Godparents’ are not appropriate as a humanist baby naming ceremony. Instead titles such as ‘sponsor’ – ‘mentor’ – or ‘supportive friend’ – may be chosen. ‘Supporting Adult’ is the title more generally preferred.

Such an adult is there to take an interest in the child’s development to maturity – just like a ‘godparent’ does in a Christian ceremony.

It is common for older family members to protest that a child should be ‘christened’ as this procedure protects the ‘immortal soul’ of the child thereby ensuring the child’s ‘soul’ will ‘enter heaven’ should he/she die.

However, the god Christians believe exists said of himself that he is a god

– ‘keeping mercy for thousands, forgiving fault, crime and sin, but by no means clearing the guilty, punishing the parents fault in the children and in the grandchildren to the third and fourth generation’. (Exod.34: 6-7)

He said so! – and does the religious mind in these more enlightened times of the 21st Century say that their god is a liar and does not mean what he says?

Or is the god of the old testament a different god entirely from the one spoken of in the new testament?

But the bloody and unloving tradition continues in the god of the new testament (ie: Jesus, whom Christians believe was ‘God Incarnate’ and he said:

Such a statement uttered by Jesus (God Incarnate) has led to history’s nightmarish bloodbaths like the butchery of 40 thousand Muslims and Jews, adults & children alike, in 1097 at Jerusalem.

‘suffer the little children to come unto me, except those not christened or baptized in my name, send them all to the hell I have created for them’

There you have it!

‘Parents have a responsible duty to guide their children towards enlightenment not backwards into ignorance and superstition thereby making themselves enemies of their own flesh and blood’.
Anthony Roberts-Moore British Humanist said this at the age of 18.

‘It is wrong, evil beyond belief, that a child should be referred to as a ‘Christian child’ or ‘Muslim child’ or ‘Mormon child’ or ‘Catholic child’ or ‘Protestant child’ – such references should be made illegal, and parents, teachers, adults of any kind, should be told: – Let that child decide for itself what faith it wishes to adopt after at least the age of fourteen’ and in doing so, religious faith will become a thing of archaic interest and officially (with great hope!) be abolished altogether’ 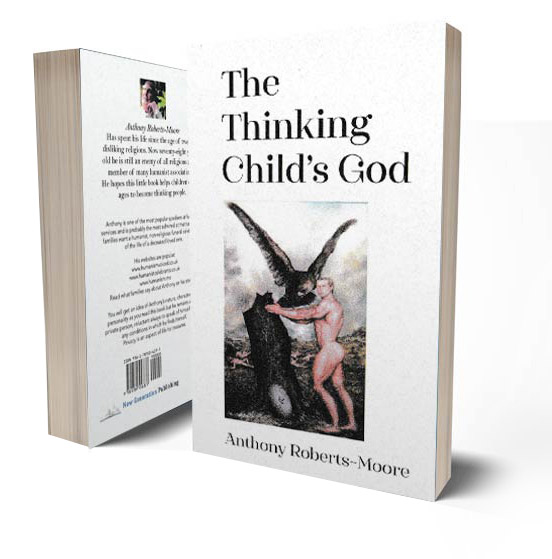